I recently invited my friend and author C.S. Boyack, over at https://coldhandboyack.wordpress.com to do a guest post for his new book “Viral Blues.”  Craig is a talented author and blogger – his posts are often filled with good humor, snark, and fun, as well as great advice and ideas.  Take it away, Craig! 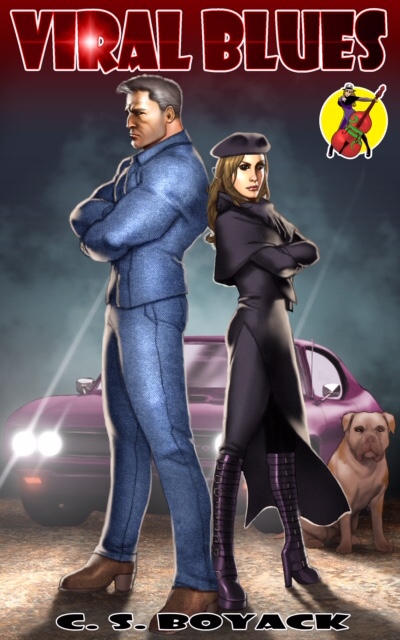 Thanks for the invitation, Leesha. It’s important to have places to talk about our work, and means a lot to me that you asked. When you’re ready for some promo, my door is always open.

I’m touring around my newest book, “Viral Blues.” I’ve been doing this for a few years, and am just starting on series work. This is part of “The Hat” series, and is the second volume. The intent here is: no prerequisite reading. You can pick up any volume and enjoy the story.

Lizzie St. Laurent is a hard-working twenty-something. When her grandmother passed away, she lost her housing, her meal ticket, and had to drop out of college. She inherited an old hat from her estate that belonged to her grandfather.

This isn’t really a hat, he’s a creature from another dimension, brought here by witchcraft. This reveals a secret family history of paranormal avengers, and inducts Lizzie into this world.

They’re pretty wonderful characters on their own, but together they form a symbiosis that’s incredible.

As a series, there are a lot of things I can explore. The hat showed up in the era of Greek City States, so he’s seen a lot, and has knowledge of Lizzie’s family dating back that far. This allows him to bring experience to the stories.

I’ve been having a lot of fun with a bit of a generation gap. Lizzie is a kid, and the team-up with someone that old leads to a fun kind of tension. The hat was in a box for twenty years and missed the technological revolution, and there is a lot to poke fun at.

This series is character driven, and I call it dark humor. There are moments of snark, and it’s intended to be humorous, even with a bit of gore.

Fighting monsters takes a tole on anyone. Decades ago, the hat took up playing the upright bass as a way to unwind. He can’t play it without the symbiosis with his partner. He uses Lizzie’s hands to play music. They formed a small cover band, and tour around playing anything with a good beat to it. This is also golden for a series, because they can have stories nearly anywhere without a lot of explanation.

In Viral Blues, they receive a cryptic invitation from someone who knows about the hat. It turns out there are others who fight against things that go bump in the night. Someone is tampering with the nation’s vaccine supply, and the goal appears to be global destruction.

I had a bunch of valid characters from previous work that I incorporated into this tale. Again, there is no prerequisite reading required, but they were all good characters that deserved a second moment to shine. They also fit perfectly into the story. I chose them carefully, and left others out. Nobody got into this book without a reason.

Series work is new to me, so there is a learning curve. One of the things I did was get my artist to make a small badge to attach to all the volumes. There are only two right now, but more are on the way. If you go to my Amazon page, the series will stand out because of the tiny graphic of Lizzie and the hat playing the bass.

Here is a small excerpt that gives you a glimpse at some of the hat’s abilities:

The owner, an overweight balding man in his fifties, was waiting for them. He counted out their cash on the bar. “One- two- three- four- five- six- seven hundred bucks. Great show tonight, kids.”

“Wait a minute. We were promised eighteen-hundred.”

“Do you have something you can show me in writing?”

“Then that settles it.” He turned to walk away.

Lizzie grabbed him by the collar. “You still owe us another eleven bills.”

“Look, the drinks didn’t exactly flow tonight. Place was half empty most of the time.”

“Bullshit! We watched those girls hustling beer all night, and the place was packed.”

The man brushed her arm off. “Take what you earned and get out of here, before I call the cops.” He walked into the back.

Lizzie scooped up the cash, then found Carl. “Take this and pay everybody. Give the drummer one-hundred and tell her I want her and her dad both to sign a contract.” She walked away before Carl could ask her any more.

“Where are you going” the hat asked.

“To get the rest of our money.” She went down the hall and opened doors until she found the owner.

“Look, you kids were good tonight. Might even have you back again. Don’t make me call the–“

Lizzie shut the door and shoved a pistol in his chest.

The man’s arms shot up. “Don’t do anything foolish.”

“I’m not the foolish one here. Park your fat ass in that chair.”

The man sat down. “What are you going to do?”

Lizzie pulled the hat off her head. He transformed into the silvery-blue goo. As she started to place the hat on the owner’s head, threads reached out for his scalp.

The hat transformed into a tall white cone with the word “DUNCE” down the front. The man screamed three times, softer each time until the last one was like a kitten’s mew.

“You got him?” Lizzie asked.

“Where’s our money?” Lizzie put the pistol away.

“It’s in the strong box inside my desk.”

The owner meekly opened the desk and placed a wad of cash on top.

Lizzie counted out the rest of what was promised.

“Might as well take it all,” the hat said out loud. “We’ve gone this far.”

“Might teach him a lesson at that.” She pocketed the entire night’s take. She put a finger to her lips and thought for a moment. “Here’s the deal. You aren’t going to remember this. What you’re going to remember is we were so good, you decided to pay us extra. In fact, you’d love to have us back, but the pay will be two-thousand from now on, and you’re glad to do it.”

“I would love to have you back at two-thousand per night.”

“Oh, and you’re going to stop ripping off bands. Whatever you promise them, you pay them, even if they’re shitty. It’s your job to research them before you hire them. You’re going to start being a better person.”

“I’m going to be a better person.”

“That’s right, buddy. Starting with your waitstaff and bartenders,” the hat added. “You’re going to give them all a twenty-percent raise.”

“You want anything else, partner?” the hat asked.

“No, I’m good. Let’s get out of here and open that envelope.” She removed the dunce cap, and before she could place the goo on her head, it was already a Cardinals cap once more.

Someone knows about the hat. The creature from another dimension that helps Lizzie fight against the creatures of darkness.

They are summoned to a cryptic meeting with a secret society, where they meet other people with enhanced skills. It turns out someone, or something, has been tampering with the world’s vaccine supply. The goal doesn’t appear to be political or financial, but biblical pestilence.

Can this group of loners come together in time to make a difference when even the proper authorities are obstacles?

Check out Viral Blues, for your dose of paranormal adventure, with a strong sample of dark humor. And in recent superhero style, don’t miss the secret last chapter after the back material.

Get your copy of Viral Blues here: http://mybook.to/ViralBlues

You can find Craig at the following locations:

40 thoughts on “Guest Post on Viral Blues by C.S. Boyack”